Last night, we loaded the kids in the car and headed out for some takeout. While sitting in the drive-thru at Chick-Fil-A, the kids were complaining about not being able to eat in the restaurant–meaning, they wouldn’t be able to climb around in the play zone. We assured them that we had something better in mind, but they were not convinced, and the whining reached the upper decibels before we reached our true destination.

Rather than the play zone, we opted for a blanket beside a nearby pond. The food was wolfed down quickly as the boys couldn’t wait to see what bugs they could catch. My wife and I proceeded to enjoy a nice quiet dinner, and we were actually able to have a conversation without constant interruptions. After finishing our dinner, we all went for a short hike around the pond and on some of the park’s nature trails. The boys found their “perfect sticks” and led the way. 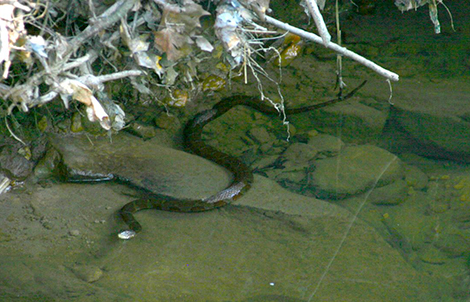 We came across a snake swimming in the water–I’m still not sure if it was a scary one or not–and the boys were on the hunt for more! As the evening light started to fade, we headed back to the car without a single complaint–the boys were satisfied and their tiny legs were spent. (Have you ever noticed that kids walk three times as far as we do, with their constant back-tracking and running around?)

With the boys thoroughly scrubbed and snug in their beds, our 5-year-old started to retell the story of our adventure and ended it by declaring that it was the best dinner ever–and we’re going to now eat by the pond every night. It really is amazing how something as simple as eating in a park can be such an adventure for the little ones.

Summer is here, and back to school sales are back. In order to lighten the impact on our finances, … END_OF_DOCUMENT_TOKEN_TO_BE_REPLACED

At a recent scout meeting, we were talking about what it means to be a good citizen. We've had … END_OF_DOCUMENT_TOKEN_TO_BE_REPLACED

Our youngest son plays on a soccer team that is blessed with two AMAZING coaches. These two dads … END_OF_DOCUMENT_TOKEN_TO_BE_REPLACED