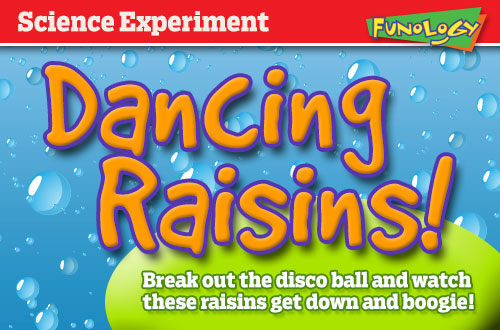 “Oooooh, I heard it through the grapevine!” Remember those adorable (creepy?) dancing raisins from the 80’s? Well, this experiment isn’t going to get your sun-dried grapes to dance around on stage with a guitar, but it is pretty neat to see. With just two simple ingredients that you probably already have in your kitchen, you can get this party started!

What makes the raisins dance?

At a recent scout meeting, we were talking about what it means to be a good citizen. We've had … END_OF_DOCUMENT_TOKEN_TO_BE_REPLACED

Our youngest son plays on a soccer team that is blessed with two AMAZING coaches. These two dads … END_OF_DOCUMENT_TOKEN_TO_BE_REPLACED

Summer is almost here, and for many of us, that means hitting the road (or the skies) and going on … END_OF_DOCUMENT_TOKEN_TO_BE_REPLACED