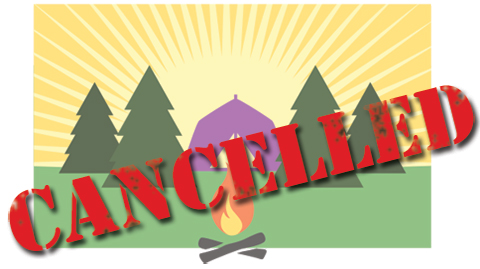 We were supposed to be camping under the stars tonight, fighting off mosquitos and roasting marshmallows over the fire. Unfortunately, life has a way of getting in the way sometimes, and we had to cancel the trip. Our oldest son came down with a stomach bug yesterday and was fairly uncomfortable this morning. Rather than spending a weekend in a tent with a miserable young boy, we decided to cancel the trip and stay home.

It’s not a huge deal, since we were camping on property owned by a family member, and we wouldn’t be out a security deposit or anything, but it’s still a bit of a bummer. I was probably looking forward to the outing more than the boys (and definitely more than my wife!), but we’ll just have to make do. Our younger son, may have been excited for the trip, but he’s as adaptable to change as anyone I know–he sets an example that we should all learn to emulate.

The great outdoors isn’t going anywhere, and we can certainly plan another weekend for our camping trip. This isn’t the first time we have had to alter and adapt our plans, and I’m sure it won’t be the last. Have you ever had to cancel a trip or modify your plans due to the kids?

Summer is here, and back to school sales are back. In order to lighten the impact on our finances, … END_OF_DOCUMENT_TOKEN_TO_BE_REPLACED

At a recent scout meeting, we were talking about what it means to be a good citizen. We've had … END_OF_DOCUMENT_TOKEN_TO_BE_REPLACED

Our youngest son plays on a soccer team that is blessed with two AMAZING coaches. These two dads … END_OF_DOCUMENT_TOKEN_TO_BE_REPLACED